Get me outta here!

As promised yesterday; I’m sharing some of our experimental hard cider recipes! The simplest way to make apple juice into something a bit more exciting was shared in this post. Today I will be talking about how to make this entire process into more of a science experiment! So exciting! (I’m such a nerd). You can also think of this process as adjusting a recipe. …Making alcohol appeals to foodies, scientists, and, really, all people that like to drink! 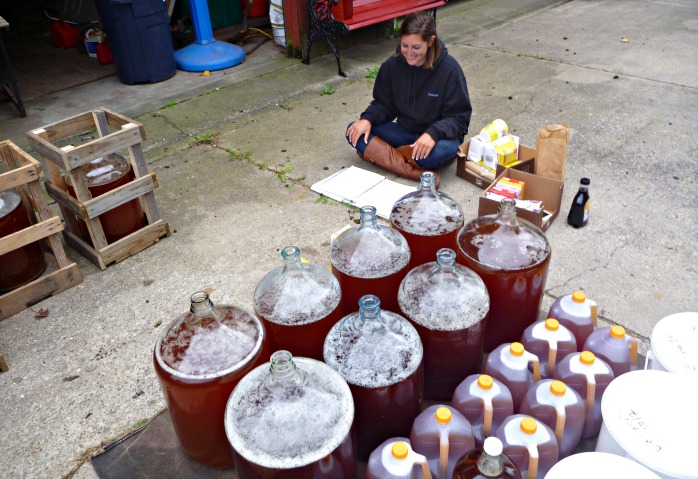 These are the recipes that have produced some delicious hard ciders over the years. Obviously, I can’t take credit for most of these. My boyfriend and his friends have been experimenting with cider recipes since they “borrowed” apples from their college cafeteria and brewed it in their bath tub. The COMMON bathtub. Not. Even. Lying.

Anywayyy… Today I will share with you my favorite recipe- so far! We haven’t bottled our cider yet, so I will add my second recipe after our next taste test! To be technical, adding sugar usually makes for a higher level of alcohol making these recipes more apple wines, than hard ciders.

Each of these recipes is for a 5-6 gallon recipe. For the pure original gravity the specific gravity was measured at 1.050 and 13 degrees Brix. That means if you didn’t add any more sugar the potential alcohol would be 6.9%- and it would be considered a Hard Cider.

After getting the original measurements we add the sugar source.

This time we added potassium metabisulfite, also called Camden tablets to the juice before fermentation. This sulfite kills off all of the wild yeast in the juice, insuring that the commercial yeast (which must be pitched at least 24 hours later) is the dominant fermentation agent.

We didn’t make a yeast culture and used dry yeast packets. Next time I would like to make a yeast culture in order to ensure a higher population of yeast before pitching them into the carboy. The yeast is then pitched into the carboy and the primary fermentation begins. We let the carboys bubble away until they stop gurgling, usually about 2-3 months. The liquid is strained from the must and filtered into a sterilized container, usually another carboy. This mixture sits for a couple more weeks, then it’s time for the taste test! If it passes our intense taste test then it it ready for bottling!

If the flavor is questionable there are a couple of options, the wine can be put through a second fermentation, or if it is contaminated or has a common cider disorder it might be in need of some more intense attention. But! That’s for another post!

What kind of sugar source would you add to your apple wine?!

One thought on “Sweet Apple Wine- with agave nectar”

But Where Can I Find…