Get me outta here!

When most people enjoy an ice cold beer, they don’t worry about what ingredients are inside the bottle.  I think it’s is a bit ridiculous that the ingredients do not have to listed on beer. I understand the brewer wants to protect their recipe, but I don’t think anyone could duplicate a beer just from a list of ingredients. I see it as a substance that is consumed, so that means…I deserve to know what’s in it!!

Shouldn’t there be some regulation on what can be added to beer!? (all alcoholic beverages for that matter) Many other countries require ingredient lists. There is some sort of regulation, but it seems to be a huge tangled mess. An article in the San Francisco Chronicle attempted to sort out this mess. After prohibition Congress saw the tax potential of alcohol beverages, and assigned their regulation to the Treasury Department. Therefore, the Treasury’s Alcohol and Tobacco Tax and Trade Bureau (TTB) sets the rules for alcohol labels. But not all of them… Wines with less than 7 percent alcohol are regulated by the Food and Drug Administration, not TTB- therefore they must list nutrition facts, including calories-but they don’t have to list what percent alcohol they contain. Regulations controlled by TTB widely vary, and are completely different for wine, spirits, and beer. Ingredient wise, substances to which people might be sensitive, such as sulfites and yellow No. 5, must be labeled, but TTB considers “ingredients” only to mean carbohydrate, protein and fat. Most alcoholic beverages do not contain carbs, protein, or fat (except for carbs in beer) so they do not have ingredient lists.

When it comes to beer, this whole mess gets even more frickin confusing. Beer is not required to list calorie content, unless it is light beer, and then it has to. Beer is also not required to list percent alcohol. If a beer is made from a grain other than malted barley, it is FDA-regulated and must display Nutrition Facts. Now forget all of this, because state regulations can overrule those of TTB. SO really, you pretty much have to guess the nutritional information, calories, ingredients, and alcohol content. Doesn’t there seem like something is wrong with this?? Beer is still a beverage that consumers put in their bodies, there should be stricter regulations for labeling. It seems absurd to me.

The first time I even thought about this was when my boyfriend and I were visiting a brewery in Virginia. I had what they called the Revival Stout up to my lips when I heard the brewer say to the couple next to us that it was an oyster stout. I immediately set my glass down and asked if he meant oyster-oysters, like the sea creatures. He kind of gave me a peculiar look and then happily replied..yes the sea creature! Come on man! I know it’s not like I’m drinking a beer with oysters floating in it. (They are used during the brewing process-probably as a clarifying agent) but still, I had no idea that oysters were a part of this beer I was about to drink! It made me think..there are few label requirements for beer. The Revival Stout wasn’t even called an oyster stout, (and I probably would of had no idea, if the bartender hadn’t been so enthusiastic) How rude!

So… the only way to REALLY know what’s in your beer, is to brew your own!! (Even though I will still consume store bought beer, obviously) Home brewing is just so…satisfying. Imagine cracking open a cold beer- strained, heated, and brewed by you, it just tastes so. much. better.

The other day we made a Coffee Stout. I say made, but it’s not complete yet! There are all sorts of home brewing kits you can find online, or at brewing stores. And there are thousands of ways to make your own beer. This is just the way we did it, with Brewmaster Lee directing us. (aka doing all of the work while we drank margaritas, because it was Cinco De Mayo).

(Brewmaster and The Boyfriend)

I’m going to just write an incredibly summed up version of our brewing experience…without specifics, if you wanna know more, ask me! Or maybe I’ll fill in the missing parts when the beer is ready to enjoy and I write an update post.

Just to get the gist… (gist is SUCH a weird word…gist. gist.gist.)

We are brewing a Coffee Stout! 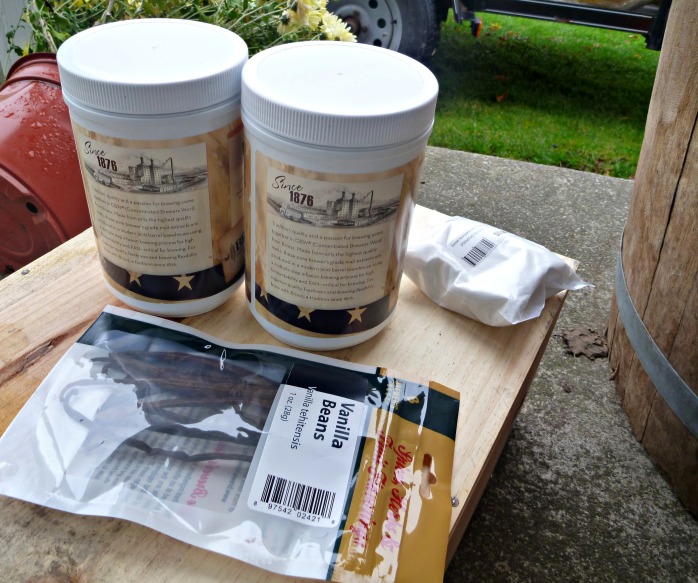 And there was A LOT of stirring…

3. BOILING: We brought the mixture to a boil and added in Perle Hops. Then boiled for 60 minutes.

4. FERMENTATION: After the boil the mixture has to be quickly cooled to 72 degrees, so that the yeast doesn’t die when you pitch it. This process requires a funky copper-colored coil, and a garden hose. At least for our front porch brewing station. Cold water runs from the hose through the coil, cooling the beer as quickly as possible! 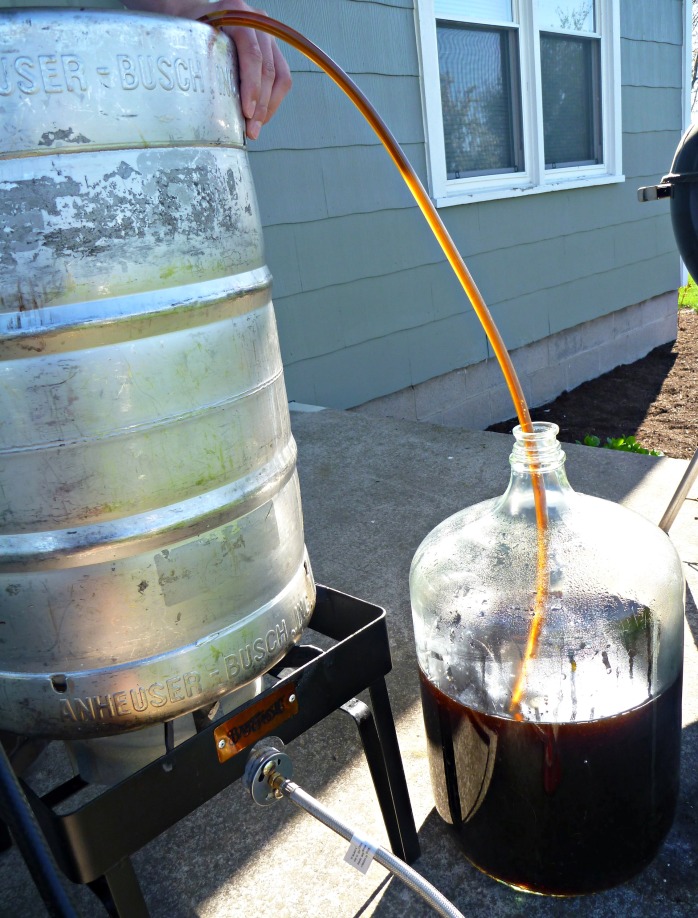 The beer was then transferred to the container in which primary fermentation will take place. The yeast was pitched and we wait 10 days for the primary fermentation to be complete. After this a couple of pots of coffee will be brewed (haha) and added to the beer…but I’ll have to add that to the update post!

Most people think brewing beer is extremely difficult. And it can be, there are so many different things to do/screw up. But, really, I see it as a great big science experiment, with a much more exciting reward than a dissected frog (poor thing). Making alcohol can be too easy (leaving a jug of orange juice in the fridge for too long??) or a bit more involved, but I just think it is so much fun, and fascinating- there are so many combinations to try! Also…the best way to understand what is going into your beer, is to make your own!  Now we just have to wait to see how delicious it is!

But Where Can I Find…